Real money online roulette although not as popular as some of its more frequently played and higher jackpot cousins in the online gambling world, remains a key part of every online gambling sites arsenal and can be found in virtually all online gaming sites.

The form of the game itself may vary from site to site, but generally most roulette games follow the same set of principles and rules. You've probably even noticed that there are several variations of roulette available at your favourite online gambling sites, and of course the more specific the site is, the more variations of this old land-based casino classic you'll tend to find there.

Roulette was once a game for the wealthy, and in certain parts of the world it still is. So how does online roulette stand up to its older cousin? Well that of course depends on what variation of the game you are playing. There are roulette games designed for the youngest gamers, often mini-roulette or with cool add-ons and side features. There are also roulette tournaments for the more seasoned veterans, with plenty of cash and oodles of experience.

Lastly, there are the standard games, generally divided into two main variants, American roulette and European roulette. A few other roulette variations exist, but none of as terribly important, not to mention as popular as the two we've just mentioned.

How to play roulette?

Naturally the idea of the game remains the same. Players must wager on either a digit, a colour, or odd or even number, or a series of the above. A ball is dropped onto the spinning roulette wheel and should your number come up, then you will win. Everybody has seen this in the movies so it doesn't really need any more explaining than this really. What does need a little clearing up is the difference between both the American and European variations of online roulette.

American roulette offers less chance of winning than European roulette for one very clear cut reason. It is a reason that often leaves players who have played both feeling cheated or robbed by the house. The simple reason is, the Americans add an extra zero to the table, a double zero. It might not seem like much, but that additional zero in American roulette compared the standard single zero in European roulette alters the house edge from 2.7% in the European variant, to 5.3% in the American one. A considerable figure if you happen to be betting at the table at the time. Even this though, hasn't altered the fact that roulette is still appreciated and played, wherever it is found. 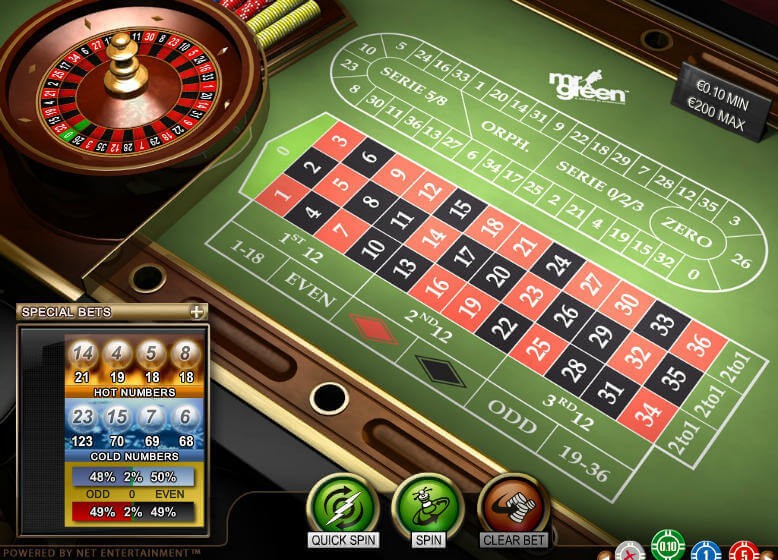